Tim Drake is the half-brother of the mutant Bobby Drake.

After his brother was disowned by their parents, Tim felt bad for him and ran away to Gotham City. He heard about Batman and Robin and thought what they were doing was awesome. He made his own costume and became Red Robin. He fought crime on his own until Batman himself offered for Tim to become his new partner after Dick left. Tim remembered his brother and declined the offer.

Tim tracked down his brother but before he could get to him, he was brainwashed by Ra's al Ghul to attack the X-Men. He managed to bring most of them down, but when Iceman approached him eh fell out of the trance. During the battle with Ra's al Ghul, Tim was hit with a spell that woke his dormant mutant gene. He grew red wings right then and there and helped the X-Men bring down Ra's. He was then welcomed into the X-Men. 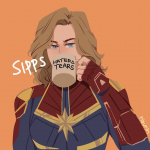